Our current recommended drinking guidelines were devised back in 1987. The authors of the guidelines have recently admitted daily unit limits were “plucked out of thin air”.

The guidelines recommend women not to drink more than 2-3 units of alcohol per day, equal to a 100ml glass of wine.

For a man, the guidelines recommend no more than 3-4 units of alcohol per day, equal to around two pints of weak lager.

New insights on the public’s perception of the guidelines

These guidelines have received recent criticism by a study conducted by the UK Centre for Tobacco and Alcohol Studies (UKCTAS) at the University of Sheffield and published in the Addiction Journal. The study claims the current guidelines are totally ignored by many of our nation’s ‘binge drinkers,’ particularly at weekends.

The study is the first of its kind by looking at people’s attitudes towards recommended drinking guidelines. 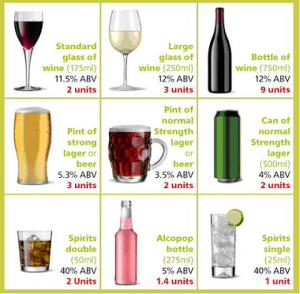 Why units aren’t cutting it anymore

The study reveals many Brits are totally unaware of what a ‘unit’ actually is. When people were aware of the guidelines many said they thought the maximum limits were impractical and therefore ignored.

The study reveals the number of ‘units’ a person drinks is not a significant motivational factor to drink less. The focus group surveyed said they felt more motivated to stop drinking if had childcare or work commitments to attend the following day. Avoiding a hangover was also a common reason for moderating one’s drinking.

But change is on the horizon

The study coincides with the NHS’s announcement that it is to review the daily recommend guidelines later this year.

Professor Dame Sally Davies, the Government’s Chief Medical Officer, is likely to consider this study when revising the recommendations. She’s already hinted she will shift the focus away from units and instead focus on practical ways of cutting back on one’s drinking, although she feels the current guidelines are ‘helpful.’

Why changes may not go far enough

UKCTAS’s study recommends a complete overhaul of the current alcohol guidelines. The study says the UK would be better adopting a twin guideline system similar to what is offered in Australia and Canada. Here a guideline would be put in place for a single drinking session and a second guideline for the amount of alcohol consumed over an entire week. This would effectively create a secondary ‘binge drinking’ guideline.

Why looking abroad may be the answer

Australia and Canada recommend no more than four drinks (not units) during a single drinking session and no more than two drinks a day over consecutive days.

UKCTAS’s study claims the current guidelines are incompatible when taking into account Britain’s ‘heavy drinking’ culture. The study further claims that the current guidelines are better suited to countries such as France and Italy where people tend to drink small amounts of alcohol every single day but don’t binge drink. Britain, the report claims, is more similar to countries such as the Netherlands and Germany were people tend to drink a lot but only on a daily basis.

What the expert’s had to say

The University of Sheffield’s Melanie Lovatt who led the study now calls for more ‘flexible and realistic guidelines’. She told Rehab 4 Alcoholism: “These findings not only help to explain why some drinkers disregard current guidelines but also shows that people make decisions about their drinking by considering their responsibilities and lifestyle, rather than just their health.”

Dr John Holmes, also of the University of Sheffield said: “The guidelines are a poor fit. You have to have some kind of guideline that recognises that if you are drinking infrequently, you might want to drink higher amounts.

“We have had ten or 20 years of trying to educate people about units. Perhaps the units aren’t the best way to go. We have a culture where we do like to go out and have a big night, we don’t really have the Mediterranean approach of little and often, we are more part of a northern European culture which doesn’t drink so regularly, but will drink more on particular occasions.”