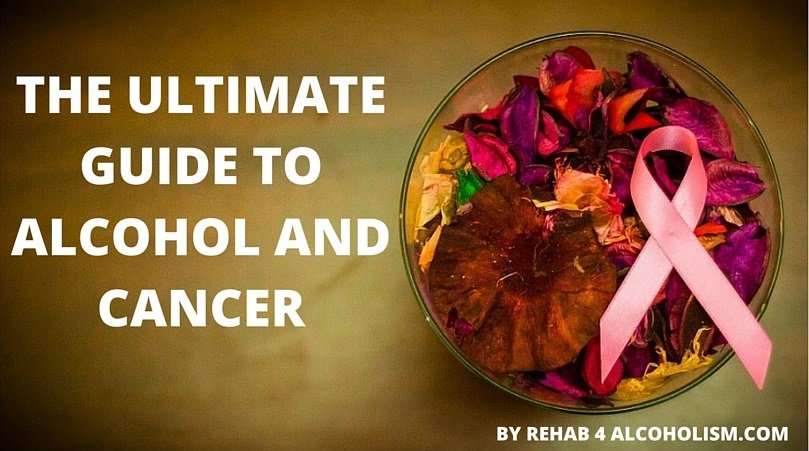 Over the last decade, there has been a proliferation of research focusing on the link between alcohol and cancer. This fact first became known to me whilst I was attending a seminar at a London alcohol rehab centre. The conclusion of this research is that alcohol consumption causes cancer. This includes cancer of larynx, cancer of the pancreas, cancer of the anus and cancer of the female breast amongst other varieties of cancer.

The idea that alcohol causes health benefits is thus a myth. Alcohol and its by-products are toxic and carcinogenic so you should really try to avoid alcohol completely or at least reduce the amount of alcohol you consume.

Types of cancer caused by alcohol

Below we outline a number of cancers believed to be caused by drinking alcohol. Please note that alcohol is believed to cause around 5000 different types of cancer, so the below is intended as a general overview:

How much alcohol must you consume to increase this risk? Well, researchers are unable to give you a precise figure but drinking around three drinks a week is believed to increase the risk of breast cancer by around 15%. If you drink four drinks per week, this risk rises to 25%.

When you socialise with your friends, drink water, soda or a ‘mocktail’ instead of an alcoholic drink. Being social does not have to entail drinking alcohol.

If you drink an excessive amount of alcohol, you increase the risk of developing cancerous tumours on your neck and head region. Specific areas of the head and neck that are particularly at risk include the lips, the pharynx and the larynx. If you drink as little as two to three drinks per day, you increase these risks by as much as 300% compared to people who do not choose to drink alcohol. These risks are compounded when you mix alcohol with tobacco.

Types of head and neck cancer caused by alcohol consumption include:

If you drink alcohol on a regular basis, you risk developing a form of oesophagal cancer known as oesophagal squamous cell carcinoma. This form of cancer is particularly common for people suffering from a genetic problem that prevents them from metabolising alcohol.

Alcohol causes a form of liver cancer known as hepatocellular carcinoma. Chronic alcoholism may also cause cancer indirectly through the development of hepatitis B and C.

Drinking alcohol is also known to increase the risks of developing rectum and colon cancer.

#6. Other forms of cancer

Although no substantive proof exists, alcohol may also contribute to the development of bladder, stomach, uterus, prostate and ovary cancer. 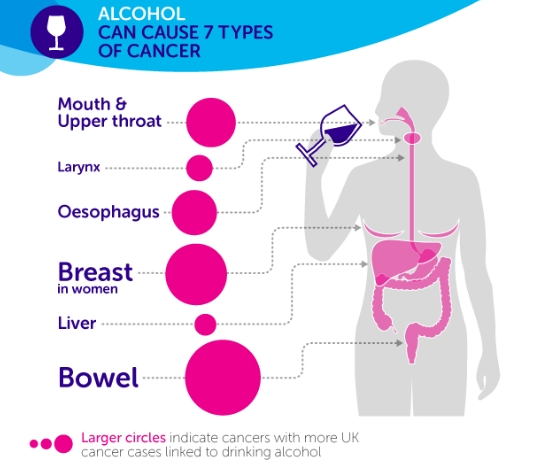 The above image is from Cancer Research UK.

How cancer is caused by alcohol

Below we outline four ways scientists believe may be the reason for why drinking alcohol causes cancer:

Acetaldehyde is an intermediate ‘metabolite’ that is formed in the liver when alcohol is broken down into harmless by-products such as hydrogen and oxygen. Acetaldehyde is the toxin that is responsible for you suffering from a hangover. Since acetaldehyde is toxic, scientists believe this by-product may also be a carcinogen capable of damaging DNA in your liver.

When alcohol is processed by a liver, it takes around an hour to process 7 grams of alcohol to harmless by-products. If you drink a bottle of wine, it will take around 12 hours for the liver to convert all of the alcohol into these by-products. When alcohol enters the liver, it is immediately converted into acetaldehyde as an ‘intermediary’. This means when you drink a bottle of wine, you will be exposed to the acetaldehyde for around a 12 hour period. This exposure to acetaldehyde is known to cause cancer in the liver and upper digestive tract.

Alcohol may increase the number of reactive oxygen molecules in your body. These molecules are extremely unhealthy since they are known to damage DNA via oxidation.

#3. Reducing the body’s ability to break down nutrients

Drinking alcohol may also limit your ability to break down and absorb important nutrients such as vitamin A, B, C, D and E. There vitamins are believed to be important in preventing cancer.

#4. Increasing the amount of estrogen contained in the blood

When women consume alcohol, the quantity of the hormone ‘estrogen’ is increased in the bloodstream. Estrogen is thought to contribute or cause breast cancer, so increasing its quantity is believed to increase the risk of developing cancer.

Drinking alcohol and smoking tobacco: what are the risks?

If you drink alcohol and smoke or chew tobacco, you significantly increase your risks of developing a range of cancers. This is particularly true for cancer of the larynx, pharynx and oesophagus as mentioned above.

But aren’t my genes to blame

The answer to this question is a resounding YES. For some people, drinking alcohol is more likely to result in cancer than for other people because of genetic factors. Specifically, you are more likely to develop cancer when you consume alcohol when you suffer from a genetic disorder preventing your enzymes from correctly breaking down alcohol you have just consumed.

Japanese people are known to suffer from a genetic abnormality for ADH. This abnormality means these people process alcohol into acetaldehyde at a much quicker rate than the rest of us. This speed in which acetaldehyde is produced is thought to increase the risks of these people developing pancreatic cancer.

Another genetic abnormality increases the risk of cancer concerns the process where acetaldehyde is converted into harmless by-products. The enzyme responsible for this is known as aldehyde dehydrogenase 2 (ALDH2). Some people of East Asian descent carry a defective gene that causes ALDH2 to malfunction. This means acetaldehyde is not correctly converted into harmless by-products. These people suffer from a range of harsh symptoms when they drink alcohol, and because of such symptoms, these people are unlikely to drink alcohol. This thus decreases their risk of developing cancer.

However, some of these people suffering from an ALDH2 dysfunction may nevertheless continue to drink alcohol despite these harsh symptoms. These people will suffer from a prolonged exposure to acetaldehyde. This causes a corresponding increase in the risk of these people developing cancer, particularly oesophagal, neck and head cancer.

Some studies funded by the alcohol industry claim drinking moderate levels of red wine may prevent the development of certain cancers. However, many of these studies were conducted on laboratory animals, and there exists no conclusive proof red wine has anti-cancer properties for humans. These studies claim compounds contained in red wine such as resveratrol have anti-cancer properties. However, resveratrol is also contained in many fruits such as raspberries and grapes.

Alcohol exposure is also known to increase the size of established tumours. For instance, in one study, exposure to alcohol was found to increase tumour volume doubling time (TVDT). Scientists believe alcohol fuels the production of a growth factor that causes blood vessel development in tumours. Alcohol intake may also increase tumour size through a process known as angiogenesis. This is when new blood vessels form from pre-existing vessels in tumours. Other theories suggest alcohol increases tumour size by depressing the immune system and increasing the speed of fat loss amongst cancer sufferers.